My two favourite breakfasts at the moment:

I’ve lifted the pistachio dukkha from one of Sarah Wilson’s IQS recipes.  It’s part of a larger (and very delicious) recipe for Lemon Thyme, Bacon & Dukkha Egg Muffins i’ve made several times, but the dukkha itself has literally become a permanent fixture in my pantry.  I gave some to my sister and she used it as a crust for a salmon fillet…drool!!  I am totally stealing that from her next time I have salmon for dinner.  She just smooshed the dukkha on the salmon & baked at 160C fan forced til cooked…she kindly allowed me to share the delicious results with you here: 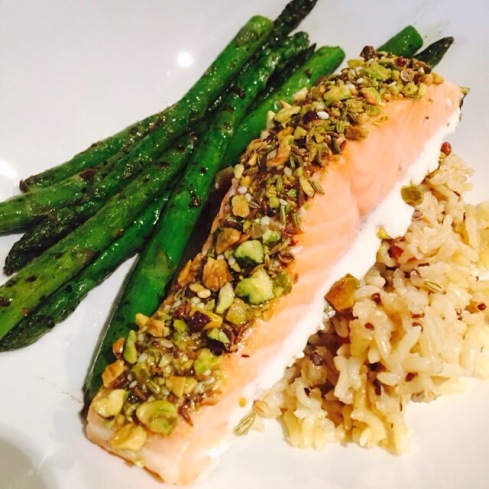 Looks fantastic, I know…and now for the dukkha recipe!

This one is just too easy…throw everything into a food processor and process until it’s mostly fine crumbs (you’ll find some pistachios don’t want to play ball, but leave these – if you go too hard you’ll end up with powder and you don’t want that).

Spread the mix out evenly on a lined baking tray and pop into a 180 degree oven for 5-7 minutes, or until lightly browned.  Keep an eye on it, as once it turns, it turns quickly!  You may need to take it out and stir it around a couple of times, depending on the size of your pan.  Once it’s ready, take it out and pop it on a rack to cool.  Bottle and enjoy, on everything!

One thought on “Breakfast.”